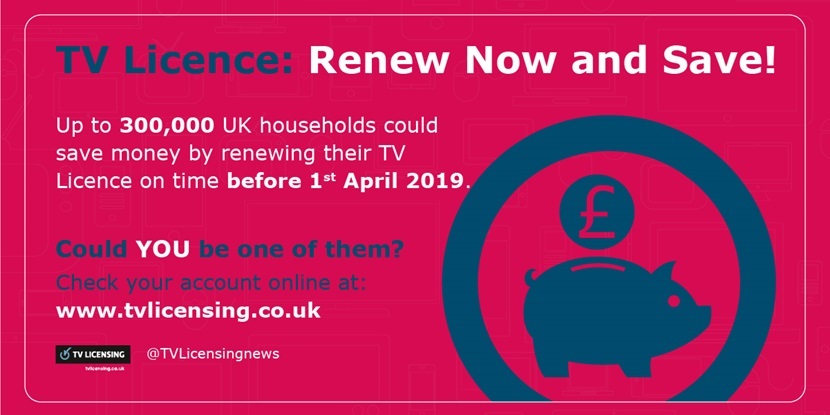 The TV Licensing database of more than 32 million addresses shows that these households all have licences that expire on 31 March 2019, so can save £4.00 by renewing promptly before 1 April 2019.

The Government is responsible for setting the level of the licence fee, and in 2016 announced that it would rise in line with inflation for five years from 1 April 2017.  The 2019 licence fee increase was announced on 1 February 2019.

The new licence fee amount equates to just £2.97 a week or £12.87 a month, for which the BBC provides nine national TV channels plus regional programming; 10 national radio stations, 40 local radio stations plus dedicated Nations radio services; one of the UK’s most popular websites; the radio app BBC Sounds; and BBC iPlayer. In the last financial year 94% of the BBC’s controllable spend went on content for audiences and delivery, with just 6% spent on running the organisation.  Programmes last year included Strictly Come Dancing, Killing Eve, Bodyguard, Dr Who, Peter Kay's Car Share, David Attenborough’s Dynasties, EastEnders, Match of the Day, and coverage of Wimbledon and the World Cup.

A TV Licensing spokesperson said: “We know people are always looking for ways to make their money go further, which is why we are reminding people to renew their TV licence before the end of the month.

“We offer a range of ways to spread the cost, including direct debit and weekly cash payments at one of 28,000 PayPoint outlets around the country.”